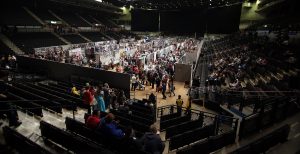 The event will again feature Cosplay – where costumes can be displayed on stage with a chance to win prizes; a comic zone where you can meet comic writers & artistes, comic creation master classes & buy that rare edition; artiste alley were amateur comic & manga artists chill out, draw and meet other artists.

The Video Game Zone will host both modern & retro gaming with many casual-play and full-scale tournaments throughout the day. Browse hundreds of stalls selling collectable movie merchandise, costumes and toys. There will be a large number of free guest talks and several paid for premium guest talks over the weekend. Join us for another fun weekend for fans of all things popular culture, with a hall full of exhibitors selling unique and official merchandise covering all aspects of everyones favourite TV and Films right now, not forgetting the unique photo shoots, panels and the visually stunning cosplay!